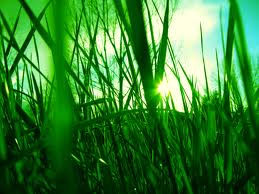 God wanted Isaiah to shout the truth that men are like grass. Because they kept forgetting. And they treated God like grass instead. They relied totally on their ways and trashed God's--just like what most churches today do. They rely on worldly ways and systems and junk God's supernatural and spiritual ways. For instance, they do not choose leaders through the Spirit's leading anymore. They rely on titles and degrees and votations, which God never used.

Anyway, the nations were in fact but a drop in a bucket in God's eyes, mere dust when weighed out by God. All of them were less than nothing, worthless. God was fed up. The nations were often insulting God's chosen people because of their seeming weakness. The pagan nations worshiped their strength. But to God, all their "strengths" were zero. He could easily dethrone their princes, bring them to naught. Exactly like grass--people are grass.

In fact, God told Isaiah, people are like grasshoppers [22]. Grass and grasshoppers, they're all the same--powerless.

The Glory of the Lord

The glory of man is like flowers; they easily fall and wither. But God's Word stays young and new and fresh forever, full of power. God's Word reigns. The Word is God's glory. That's why God's Word is supreme. We should do everything according to His supernatural Word and ways. But men often prefer the world's ways, which are temporary and frail. Worldly ways look impressive, but in truth they are garbage.

God told Isaiah that the glory of God will be revealed to men. For it to be revealed, radical things had to happen--valleys raised up, mountains flattened, rugged grounds leveled, a straight highway in the wilderness. Men who claim to be believers would have to turn upside down, and even churches will have to turn turtle. What they call "Revival Services" are nothing. Those are just showmanship. They never amount to something Kingdomly.

What God will do is reveal His glory to all mankind, and this will be something radical and revolutionary, reversing things, turning things upside down. I can see church people giving up their church denominations and joining the one united, supernatural, and spiritual church of the Lord Jesus Christ worldwide, according to his principles in John 17. This will be the last one big revival in the Last Days.

These people will undergo extreme transformation so they would fit Kingdom standards and be real Kingdom people. Their transformation would take mountains being flattened, valleys raised up, rugged grounds straightened, to smoothen life and character so that Jesus Christ is seen in them. The Jesus LIFE becomes their life and they no longer live but Christ lives in them. That's genuine God's flesh.

The Lord Blows on Them

In Genesis, God's breath blown on the nostrils of Adam produced life. But God also uses His breath to blow on man's glory to make it fall like a withered flower [7]. God's breath can wither and fell man's glory and also give them life, the LIFE. The Lord also blows on arrogant leaders to make their leadership wither, and God's breath becomes a whirlwind that takes them away as chaff [24]. You see, people are grass. They can easily get pulled out, wither, and blown away. yet, they will never use God's ways in the Word. So a mighty shaking is underway. A powerful destroying and rebuilding.

Rebuilding is not more and more church activities as many suppose. It's waiting on the Lord. If we just learn again the power in waiting for God, our strengths will be renewed  to soar tremendous heights like God's eagles so that with our walks with God we will not faint, and we'd level up to running with God and keep pace with him and not grow weary (40:31). We'd be more than youthful (even youths grow tired and weary and stumble and fall). Youthful strength is nothing compared to having God's own strength in us through Christ.

Don't be just mere people--people are grass. Be sons  and daughters of God--have God's DNA. Be God's flesh on earth.
By Gaerlan CS - February 14, 2012