Without Revelation You Die 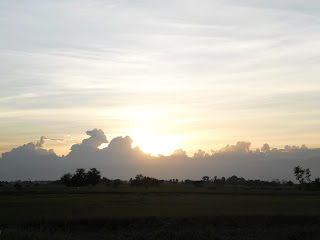 Jesus Christ revealed--this is the Rock where Jesus builds his church, a church which crashes the gates of hell. Jesus once asked the disciples who people from the villages said he was.

After saying this and that, Peter finally said Jesus was the Messiah, Son of God. My Jesus commended him and said that such insight was not from men but a revelation from God. "And upon this rock," he added, "I will build my church."

"This rock" is revelation that comes from God, revealing deeply (and much deeper each time) who Christ is. That's what the context says. Some think this rock referred to Peter, because Jesus had said, "I tell you, you are Peter, and on this rock.."

Jesus was actually telling him, compared to this revelation Peter was a small rock. However, a small rock with a big revelation of who Jesus really is becomes the Rock (God) on which Christ will build the true church. No, you don't become God, but your life becomes hidden with Christ in God, so that The Rock (God) takes full charge of your body, your life. It's not you anymore but Christ who lives in you, as Paul said.

This was not exclusively to Peter. Anyone who gets God's revelation of who my Jesus really is becomes "on this Rock I will build my church." God is the Rock and you become part of Him. In fact, He is your LIFE.

It was not because Peter was so gifted with revelation that he had the Rock of revelation, or because he was so intelligent, but because the Lord is The Rock, and anyone who gets the revelation of who Christ is, Christ begins to live in him or her in bodily form. That individual begins to reveal the Rock outwardly.

Unfortunately, Peter's pride bloated and he began thinking he knew better than did Jesus. He was trying to save their gains and accomplishments so far in ministry when he rebuked my Jesus after He said he'd get killed. Peter's insight came from human thinking, not God's revelation. And my Jesus showed that anything humanly instigated is "Satan." Without revelation you die, even instantly.

Revelation is vital. It is more important than your job, position, title, church ministry, business, finances, and even what would become of life in this world. Revelation is what Jesus died for. God's revelation alone will set us free from this world and wickedness. Without revelation or vision, a people perish, says Proverbs 29.18. You can be very active in church and ministry and have all the titles and degrees and yet be spiritually perishing.

Anything God himself does is powerful. Revelation is God-initiative. Bible study is when you try to seek God in Scriptures with helps from some literature materials. That's good. But if you remain just doing that, you'd soon perish. No wonder there are many who are burned out by church. Without revelation you die, even if you study the bible, even formally in bible schools or seminaries. What you get from these human institutions are facts, not revelation. Facts amuse you and make you smarter. Revelation transforms you--forming Christ Himself in you. You die to the world and my Jesus begins to really live in you. Only direct revelation can do that, not facts.

Revelation is When God Opens Up Truth to You

Bible study is man's effort to know God. It's a good basic training. You try to know God with your intellect, and this also is only possible through the Holy Spirit. But somewhere in your spiritual life, you have to leave basic teachings behind and go on to maturity, says Hebrews.

As you know God more intimately, He begins to open up truth to you. In this case, it's no longer your effort. It's God's effort. God is opening up something to you, and you should pay special attention. All you need to do is listen. You don't even have to think or analyze anything. Hence, when Jesus was transfigured and Peter began thinking up things they should do, God's voice told him, "This is my well loved Son. I'm so fond of him. Listen to Him."

Revelation is when you just watch what God is doing and opening to you. Once upon a time, I loved bible studies so much. But the moment I learned about revelation, I've always sought it. I want God to open the eyes of my heart to see the genuine hope of his calling, the tremendous power of the inheritance I have in Christ--God's own incomparable power in me. That power was the one he used to resurrect Jesus from the dead and place him on his right hand [Eph.1.18-22].

Revelation sits you on the same throne where Jesus is seated (because you are in him), far above any position or title or authority or privilege this world worships. Thus, if all you get from your church are facts and bible studies and information and other forms of human knowledge (though this also comes from Holy Spirit enlightenment), you're still headed towards death.

There's a way that seems correct, but later you discover that it leads to death, says Proverbs. Revelation from God keeps you away from this.

Revelation means God is at work in you. No matter how weak or small you seem to the world, as long as you have revelation, you are assured that God is at work in you. Because only God can open revelations. The devil can play tricks with information and facts (masquerading as an angel of light), but only God has the right to revelations.You're on the right track, regardless of your material or worldly accomplishments, even in ministry, if you get fresh revelations from God daily.

Revelations is the meat that forms Christ in you, giving you the Jesus DNA, which is God's flesh on earth.

Even the wicked and criminals get material possessions in this world. They get respect and popularity. They accomplish a lot of things, even for God. They are recognized and envied by narrow-minded people. But only the truly righteous are rewarded with God's revelations. Moses in Deuteronomy told God's people that secrets belong to God--but the things revealed belong to us and our children. God's revelation is the real inheritance that lasts. It's a real treasure to have God reveal his secrets with us, by his grace and mercy. That makes those who are poor in this world to be rich in God.

Revelation Makes You Poor in Spirit

But revelation has a price. It's free--being by grace through faith--but it costs total surrendering of your life. No more rights or privileges or setting up your own denomination or popularity enjoyment. Revelations destroy the flesh and ego. If you still have your ego, you've not yet tasted genuine God's revelation. If you still talk about your growing church ministry like it's all to your credit, you still haven't eaten even a piece of real revelation. You've been deceived by facts and information.

Revelation leads to the Jesus cross--rejection, scorn, being belittled, persecution, being hated even by so-called Christians, misinterpreted, abandonment (even by your disciples), and a seeming image of defeat. All these were suffered by Jesus. But revelation also leads to a future glory, often a glory and ascension (Kingdom promotion) that only your real disciples would see and appreciate, as in the case of my Jesus.
By Gaerlan CS - August 05, 2012