Here's Gospel of the Kingdom 4
Matthew chapter 4 clearly shows it. Jesus did just three things in ministry---preached the Gospel, made disciples and healed the sick. Period. Nothing more, nothing less. And that's what he did to the end, before dying on the cross for our sins. Then in John 14.12 we find him saying, "Anyone who has faith in me will do the same works I've been doing."

If you want to do the genuine ministry, you have to do as Jesus did. And he focused on just three. Anything beyond them is trash. Dead works or works of the flesh. Good to look at, even effective, but trash nonetheless. It can draw lots of people to your church, even produce conversions and mega membership, but it will just create an image of liveliness.

...you have a reputation of being alive, but you are dead."

Here's a Sardis church---sleepy, dead and whatever it has left is about to die, incomplete. And yet it has a reputation of being alive. It looks so good, growing, and right. Jesus said any time branches detach from the VINE, they could do nothing substantial for the Kingdom. Of course, you can do a lot. You can do anything you like, especially effective things. Even draw lots of people to church. But it will not amount to anything in the Kingdom.

Remember the seed that fell on the path? Or the one that fell on thorns? Or the one that ended up on rocky ground? You can have a big church with nothing but these types if you don't do it Jesus' way. Remember, he is the Way. And he said, anyone who believes in him will do the same things he did. THE SAME. That's a major part of the Gospel of the Kingdom.

Preach, disciple, heal. Just three. Jesus simplified it. And the result? People desperately went after him. They crowded around him like crazy that sometimes he even tried to avoid them. They looked for him in all places---in big multitudes---without Jesus inviting them or pestering them to "come again next Sunday."

Preaching (or evangelism) may take on various forms, if you want to be a bit creative. It may be personal or mass evangelism. You may make it look like a tupperware or tea party, a mountaineering or cycling club, an office break fellowship, a company team building activity, a business opportunity meeting (BOM) or medical mission. But the main ingredient has to be there---sharing the Gospel of the Kingdom. Make sure it's for Kingdom advancement, not just a local church goal to grow mega-ly.

And the thrust is repentance. Jesus and John the baptist focused on it and so would the 5 churches in Revelation in the last days (see my article on this here). So, in these last days, repentance should be one of the strong points of your church's preaching, aside from Jesus as Savior, Lord and coming King.

Discipleship may be like a cooking class or food-trip blogging group or gym team or even a college fraternity (minus the hazing). The idea is to have some kind of small family bonding of believers committed to the Lord, to each other and to their discipler. Doing a common interest (like cooking, blogging or fitness) comes in second. The priority is mentorship in getting intimate with Jesus and acquainted with his Word and Presence.

The idea is for the discipler to share his life in Christ. So they do things together, like cooking or jogging or a college study group and then rubbing spiritual DNA with each other. Through what they do and how they relate with each other amid their work (they may even live together as family, as the 12 left their families to live with Jesus), the discipler rubs the life and character of Jesus in him on his disciples. So his disciples get his Jesus DNA.

Thus, discipleship is not just bible studies. Definitely it's not buying a bible study material and studying it together. That's religion. True discipleship is LIFE TRANSFER, not by force but by grabbing or seizing the Jesus life and character in the discipler. It is LIFE IMPARTATION. The disciple must go after the discipler to catch the Jesus LIFE in him. To get the double (or triple) portion or anointing.

The disciple should do this on his own volition. It cannot be legislated, forced, required or demanded. Jesus merely issued a short simple invitation to his prospective disciples with a "Come follow me," and they immediately left everything and followed him. This is the Kingdom principle of pursuit. The disciple must pursue the discipler, or nothing. More on this in the next Kingdom article.

Later, discipleship develops into fathering, like in Paul and Timothy and Titus. I remember Elisha desperately going after Elijah in the prophet's last moments before being raptured to heaven. Elisha followed wherever Elijah went (he even lived with him) and finally grabbed his cloak and struck the river with it, saying, "Where is Elijah's God?" He was really after the God of Elijah, not just Elijah.

In Christ, we are all given the power to heal the sick and cast out demons. The church should seriously do this (but which it has been ignoring or belittling for centuries). Churches who ignore this power (or mock it) are Sardis churches---Jesus finds their deeds "unfinished (or incomplete) in the sight of God." They are urged to repent and wake up, or else...

God designed ministry to be simple. Just focus on this three. You do not need to invent more or add things to it that will appeal to the world. You don't need to attract the world. Just be faithful to God.

Well, people did go after Jesus desperately when he did the three, but they also crucified him in the end. That's another mark of a genuine Kingdom ministry---people will crucify you in the end. We cannot escape the cross. It's not optional. Paul said all who want to live a godly life in Christ will be persecuted [2 Tim. 3.12].

The thing is, if we do something else---something the world will love---we will be a total failure to God. Successful in the eyes of the world, but demolished in God's eyes. Friendship with the world is enmity with God. Lots of churches avoid being a bad shot to the world. They want to please people and do everything in church that would earn people's respect---attract the world. They don't want to offend anyone. But without the cross (persecution), we would be counted with the false prophets.


Woe to you when everyone speaks well of you, for that is how their ancestors treated the false prophets. [Luke 6.26]

Stick to the three main focuses and you'd see how Jesus is naturally glorified and persecutions naturally come to you. 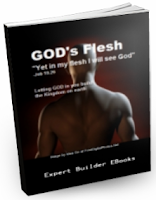 Get my short emailed insights regularly when you buy the e-book through the email address above. The e-book shares radical insights about church and on genuine spiritual revival you probably haven't heard of.
By Gaerlan CS - January 22, 2019