Apostolic Teachings 2: The Son Can Do Nothing

Here's Part 1
As I've said, the church needs to DEVOTE itself to the apostle's teachings as the Acts church did. I stress on the word "devote" once more. They didn't just try or touch on them. The believers in Acts devoted themselves to it. As serious as the picture shown above. And apostolic teachings are found all over Scriptures, both Old and New. The church's problem is, they can't see it. They read past them but don't see them in spirit.

So the church has become worldly, worldlier than the world. It has religious rituals to make it look spiritual--everything orderly and according to their sound theology--but very worldly nonetheless. Rituals will never fool God. God looks for his truth, his Word made flesh. Genuinely apostolic and prophetic. Without this, church naturally and inevitably turns worldly. That's why we have to devote in them.

Here's an example. Jesus told the Pharisees how the Son can do nothing except what he sees the Father doing [John 5.19]. That's powerfully apostolic. Why? Because first, Jesus taught it, and he is the apostle and high priest of our confession, says Hebrews. Second, apostolic has to do with spiritual fathering. Too bad, church doesn't know this principle so it's lost when it comes to Sonship and Kingdom building. So it copies corporate systems when it comes to relationships and governance in their local church and church growth.

If you're a true son of God through Jesus, you too can "do nothing" except what you see the Father doing. This protocol sounds very strange to the modern church which is used to sitting down together and planning strategies based on what their human eyes see and ears hear--on how they judge situations--and then pray for it. It's making plans and then asking God to bless it. Jesus didn't operate that way. True sons never operate this way.

They wait to see what the Father does, and they stick to that. The Father plans (his plans have been ready before the creation of the world) and sons and daughters just join him in his work. This is fathering. This is apostolic. The Acts church devoted itself to this. Thus, the disciples did nothing but wait in Jerusalem for the Gift the Father promised them. They were in a room praying, just obediently waiting (for what "gift" exactly, they didn't know) and then the Holy Spirit came to baptize them with tongues of fire.

They didn't plan this. They didn't decide that this was what they should do. In fact, they didn't know this would happen. God made it happen in their midst. And it became a pattern throughout the book of Acts (aptly titled The Acts of the Holy Spirit). At one time, John and Peter came to the temple courts for the usual hour of prayer at 3 pm. Then they met a beggar lame from birth and a miracle happened. It was all God laying the plans, starting everything, and the apostles merely joined God in it. They did what they saw the Father doing.

The death of Ananias and Sapphira led to a great church revival and great fear was in others who heard of it. They didn't plan this and decide to have a church revival. God made it happen. They simply moved along with it. The same with the martyrdom of Stephen. The church didn't plan it. It just happened. The ensuing revival and powerful evangelism was a result of what God allowed to happen. And how did the church start work in Samaria? It was through the signs and wonders God wrought through Philip. The apostles didn't sit down to meet and plan a miracle crusade and formed committees for it the way church does today.

And so forth and so on.

All these were apostolic, the very same thing that Jesus did. They saw what God was doing and joined in. They didn't do anything except that. They were Spirit led in the true sense of the term, not man-led. The Father showed them what he was doing. And if you're a true son, the Father will surely show you his work because he loves you. The Father's love opens your spiritual eyes to see what he is doing in your midst, even greater works.


20 For the Father loves the Son and shows him all he does. Yes, and he will show him even greater works than these, so that you will be amazed. [John 5]

Churches today don't do this and they will have great difficulty trying to understand this. They would even laugh at any notion of not doing anything but what they see the Father doing. See what God is doing? Can you really see God? They'd laugh at the idea. Why? Because it is not apostolic. Only the apostolic see this. You see what the Father is doing because God has opened your spiritual eyes. It's a sure thing. Jesus cannot be lying when he said, "no one knows who the Father is except the Son and those to whom the Son chooses to reveal him." [Luke 10.22] 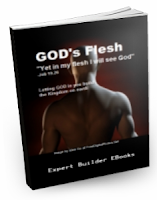 Get my short emailed insights regularly when you buy the e-book through the email address above. The e-book shares radical insights about church and on genuine spiritual revival you probably haven't heard of.
By Gaerlan CS - February 22, 2019