I'm always attracted by Jesus' radical simplicity and his preferential option for the poor and weak--although a lot of smart experts continue to challenge this. They say Jesus was middle-class or even a degree above it and actually lived quite comfortably, influenced by the lifestyle or cost of living in nearby Sepphoris, a high-class village for sophisticates at the time. He probably earned his living there, too, they add.

Well, Joseph's and Mary's offering of a pair of doves for Jesus when he was dedicated at the temple speaks volumes about their status in life. As he grew up he remained being known as "son of a carpenter" and once described himself as someone with "nothing to lay his head on," hinting that birds and foxes were better off than he was because they enjoyed nests and holes, respectively.

Jesus purposefully avoided Sepphoris perhaps because of what it stood for--worldliness--because it was where the rich and the religious leaders indulged in excessive luxury and entertainment. It was one big classy vacation resort for the rich and famous. Nothing bad about luxury and entertainment. I love to go on vacation. I love good clothes. I enjoy good food. In fact Ecclesiastes advises people to enjoy life because there's nothing else better to do in this short life we have. But not when it becomes too much and drowns you in worldliness. That's what Jesus abhorred.

Actually, everything in life is good until it traps you in worldliness. Even smartphones. They're necessities today but it doesn't make sense to own 3 or 5 of them and to spend all you have just to get the latest and most expensive version. If Jesus were here today as a millennial, he'd own a 3210. Or probably the cheapest touchscreen available, and just one unit would suffice. Why? Because he'd be a poor millennial? He wouldn't be able to afford it? Nope. Because material things were never his priority. Didn't pay much attention to them.

Churches are in some crazy contest of who's got the best building facilities or musical instruments and sound systems--or who could best play the drums the way their favorite rock star can. Church has become as sophisticated as the world that it's hard to find a trace of the real Jesus in the bible in it anymore, the Jesus who managed to live and worship well with what simple things were available at hand. But his spiritual experience with the Father was par excellence--nothing sophisticated churches today can produce.


Yeah, there's much talk about being Christ-like and doing things as Jesus did them. But it's all talk--and crap. All lies. Nobody really wants to be like Jesus. NOBODY WANTS TO BE LEAST. No one wants to just retreat to the background, in some dimly lit nook and cranny unnoticed and ignored, just doing God's will quietly, simply and meekly. In fact, that's the church's greatest fear today--to be unpopular, ignored and discarded. To be least. 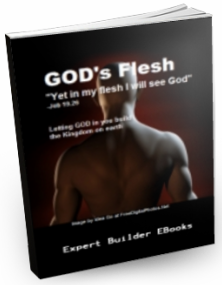 Get my short emailed insights regularly when you buy the e-book through the email address above. The e-book shares radical insights about church and on genuine spiritual revival you probably haven't heard of.