New Normal in the Spirit 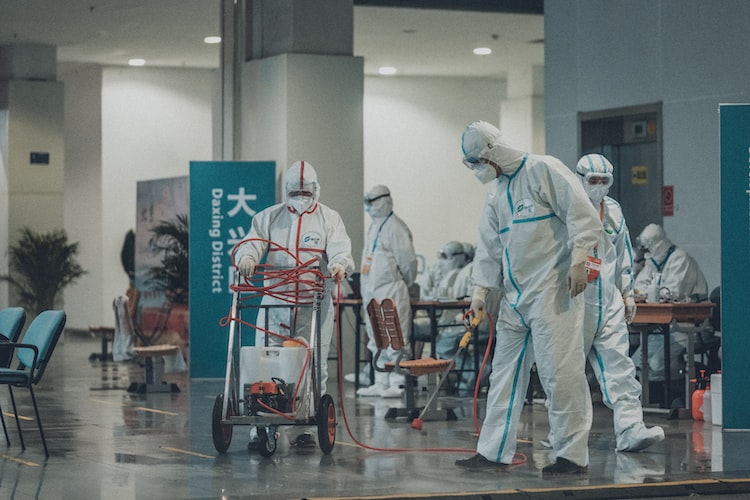 This is NOT a time for usual things. Much less for church traditions. If in CIY Fellowship we've been doing things so unusual, it's time to leave these "elementary teachings" and go on to the next level of maturity. As there's a new normal in the world, so there is in the heavenlies. Actually, the new normal in the spirit realms has started long before the one in the world came to be. [Picture by TedwardQuinn, Unsplash].

Just as the Jesus' spiritual church started long before man's church in this world started.

Least is the Greatest

In these last days, God is introducing some brand new things to the Philadelphia church [Revelation 3]. This church is weak (it has "little strength") and probably belittled and despised. The least church by all earthly measures and standards. But in God's eyes it is a 5-star general in his army, being in possession of an "open door" from the Lord that no one can shut.

To this church Jesus has given the following:


I will write on them the name of my God and the name of the city of my God, the new Jerusalem, which is coming down out of heaven from my God; and I will also write on them my new name. Whoever has ears, let them hear what the Spirit says to the churches.

The name of God and of the New Jerusalem, and Jesus' "new name" are given this church, and God's "name" is his nature. Jehovah Rophe is God's nature of being the Healer, Jehovah Jireh is his being the Provider, El Shaddai his being the Lord God Almighty, Jehovah Nissi his being the Banner, and so on. His name is His nature.

When Jesus gives us God's name he is giving us God's nature through Him. In Christ we heal, we provide, we are banners, and we have the Lord God almighty living in us. We are God's sons and daughters while Jesus is the Son. Jesus is the Light while we are lights.  We are co-heirs with Christ. We are seated with Jesus in the heavenly realms. But this truth is barely explored in church because church has been busy with earthly things that it calls "ministry."

Church is anything but spiritual and supernatural. Church knows only how to move in the flesh, not in the spirit. It's best "spiritual" activity is merely earthly, and even Jesus' earthly teachings it cannot fully grasp. Jesus asked Nicodemus once:


I have spoken to you of earthly things and you do not believe; how then will you believe if I speak of heavenly things?

But in these last days, these powerful teachings will be revealed more to the Philadelphian church. The church will receive God's nature and live out heaven's culture (new Jerusalem coming down on it, which is a fulfillment of "thy Kingdom come, thy will be done on earth as it is in heaven") and possess Jesus' new nature. Absolutely no more man's programs and plans and activities and no more man's theology which all serve to make us drift farther from the supernatural God--earthly systems of Babylon that shut the door for spiritual breakthroughs. No wonder the open door for this church this time cannot be shut close by anyone anymore. The remnant church has to make up for the great loss.

Anyone in the move of God now has an open door! No need to knock. We can go in and out and find pasture. Even Jesus himself does not need to stand at the door and knock. The door is wide open for both Jesus and his true church to go in and out and fulfill the Plan in his supernatural ways. This is the time to declare things that are not as though they are. Jesus healed the paralytic without praying. He multiplied bread and fish with a very short prayer. Jesus merely spoke the word and didn't need to go to the centurion's house to heal his servant. He resurrected Lazarus from the dead without asking the Father about it, but merely stated that he knew how the Father always heard his prayer.

Long, poetic and dramatic religious prayers have no place in heaven's new normal!

It's a powerful open heaven, something like what Jesus had-- and what Moses and Elijah had. Every prayer will be answered with awesome signs and wonders and miracles. This is when the Two Witnesses (how the Holy Spirit manifested in the lives of Moses and Elijah) will endow the church with supernatural power in the last days--the awesome power of God operated with a mere Word. Sorry for churches that do not believe in signs and wonders and genuine spiritual gifts (or pay lip service to them) and teach that these things have ceased in our modern times. But they pray long prayers.

True believers will abandon man-made standards and institutions--lveer away from magnificent church buildings and mega churches, for instance, and go back to ordinary house churches or room meetings, as perhaps why the disciples met in the upper room instead of the temple courts. My imagination tells me that after Jesus' resurrection had torn the temple curtain in two, people saw that there was nothing in the inner sanctuary. It was as empty as the empty tomb. All along they thought there was still something there.

The curtain that hides the powerlessness of man's church will soon be torn and the church fully exposed for what it really is. And true believers will start turning to the Lord in truth and to Jesus' glorious church, without spot or wrinkle or any blemish. They will reject man's bogus churches.


In that day people will look to their Maker and turn their eyes to the Holy One of Israel.
They will not look to the altars, the work of their hands, and they will have no regard for the Asherah poles and the incense altars their fingers have made. [Isaiah 17]

Well, supernatural activities once took place in their temple--like when Zechariah the priest saw an angel in the temple and went mute for a while for not believing the angel's prophecy. But after that, Jesus declared the physical temple null and void in John chapter 2 because his body was now the "new normal" when it came to God's genuine temple, his true abode. The true temple is spiritual. So no more magnificent religious buildings for God.

And while in that simple, unimpressive upper room, a great spiritual breakthrough happened. They spoke in tongues. It never happened in the temple or the synagogues. The top religious leaders of their bible-based religion at the time didn't understand what it was. It was a new move of God never before seen among God's people. It was a new normal. Since then, powerful things now happened in seemingly weak and small gatherings. The disciples continued to meet more from house to house and seldom met at the temple. They grew in numbers but met in small groups.

And no more priests and high priests and law teachers and scribes. Instead, the apostles, prophets, evangelists, pastors and teachers took over. This is the name of the new Jerusalem--the very culture of heaven on earth. But church denominations later dismissed these anointed offices and thought that their missionaries, superintendents, directors, presidents and seminary professors were smarter ideas.

They say the offices of the apostles and prophets have stopped. Says who? But in heaven, the apostles continue their ministry--they are among the elders worshiping God day and night--and the 12 foundations of heaven are named after them. There are still apostles in heaven. And Jesus said, "your will be done on earth as it is in heaven."


The wall of the city had twelve foundations, and on them were the names of the twelve apostles of the Lamb. [Revelation 21]

They even made bishops their denominational leaders instead of apostles. Apostles and prophets they trashed as obsolete. But in Paul's letters, he told Timothy and Titus to assign elders and deacons (bishops in other translations) in church. Bishops are assigned by apostles who lead the church because the church's foundation is "built on the foundation of the apostles and prophets, with Jesus Christ Himself as the chief cornerstone."

Parable of the Seed

The seed was sown on the soil and stayed there a long time. No seed grows and bears fruit overnight. It has to stay in the soil all alone by itself. It's "quarantined" there. And this lockdown or quarantine is designed to make us sprout and grow and bear fruit a hundredfold "what was sown."

But be careful what soil you're locked down in. There is the pathway, the rocky ground and the thorny ground. Pathway is when you cannot get revelations from God because as soon as you hear it the devil steals it. Do you know that your love for God is what catches the Word and makes it stay in your heart? "He who keeps my word, he it is that loves me."

The rocky ground is focused on the cares of this life. They involve themselves in politics and its useless issues, for example. Or their careers, professions, studies, families, especially in this Covid lockdown period. Be careful with being followers of Duterte or defending the cause of ABS CBN. Spend your quarantine time in these things and you end up like the seed in the rocky soil--always excited about God only in the beginning.

The thorny soil just thinks of money and how to make it grow. Or taking care of their lucrative connections or potential earnings. They hate being least because they want to be with the greatest and popular. There's nothing in their prayers but financial and material concerns and needs. They worship on Sundays so God would protect their wealth or grant their petition for promotion.

All of them are church goers and active church members. They even sound so spiritual and gentle and post nothing but bible verses on Facebook. They go online for live stream worship. They think this is the right thing to do during quarantine--they think this is the soil that produces crop a hundredfold.

But what God wants us to spend time in during lockdown is go deeper in his Word. The seed needs the fertile soil of the Word, being watered also by the Word. This is what the Philadelphian church did in the last days:


I know that you have little strength, yet you have kept my word and have not denied my name.

Well, all churches study the Word and preach it. What's the difference? The Philadelphia church studied it in-depth in a way that they 'have not denied my name." They meditated the Word and lived out the nature (the name) of God. And that means living his character, life and awesome supernatural  power.